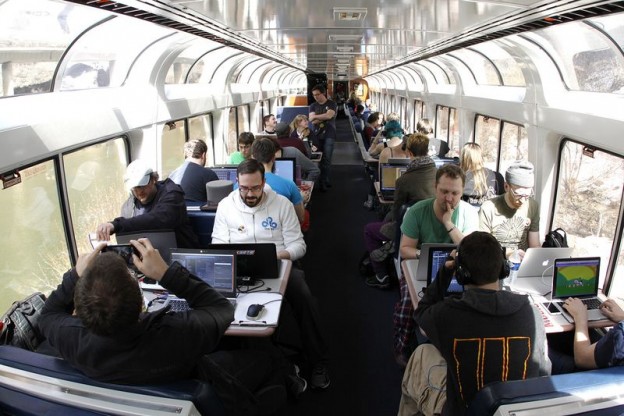 “We’re thrilled to continue sending student ambassadors to Train Jam each year. This is the second year we’ve done so, and results from both years are very positive,” Geisler said.

The participants met in Chicago and split into groups. The groups were then given the theme “Maximum Overdrive” and tasked with creating a game that incorporated the theme in the time it took to travel to the conference.

Rismeyer and Labeots joined forces with professional Ryan Smith of Human Head Games in Madison to create their game, “Tickets Please.” Focusing on keeping it simple, they had a working version of the game after 45 hours and a completed game close to the time limit.

“Our game was based around the idea that the player was in charge of a train station,” said Labeots. “The player’s job is to place passengers onto their respective trains based off of the information on their tickets. If the train reaches the maximum amount of passengers it can hold before it leaves, the player gets an extra bonus.”

Labeots and Rismeyer said that working with the professionals was an incredible opportunity.

“The first big developer that I met was actually a technical lead from one of my favorite game companies, and I was almost shocked at how approachable he was. He seemed like just another game developer among the crowd,” Rismeyer said. “While there was a difference in the quality of work between a professional developer and somebody like me, I found it to be very motivating.”

“It was great getting to work with people already in the field. Their knowledge was invaluable,” said Labeots.

Rismeyer learned about this opportunity in the fall semester when there was an e-mail sent to all of the Computer Science students regarding two slots that were open for students from UWGB to take part in the Train Jam and Conference.

“I decided to apply because I have always loved the challenge of game programming, and saw this as the best opportunity to gain practical experience while meeting new people and making important connections in the industry,” he said.

Looking to the future, Labeots, a fourth-year Computer Science major, looks forward to taking this experience and applying it to his future. “Game development is a main goal for employment coming out of college. This was a great opportunity to get to network with people already in the field and get a sense of what it is like to work in the game industry.”

Rismeyer, a junior majoring in Computer Science and minoring in Mathematics with an emphasis in Statistics, aspires to become a data analyst post-graduation.

“While I do enjoy programming games, I do not want to bank completely on game development for my future,” he said. “I hope to be a data analyst of some sort after college. It has become obvious to me that this is an emerging field both within game development and the general information technology field, and data analytics and statistical analysis are things that I thoroughly enjoy.”

Geisler said the Train Jam opportunity is an incredible portfolio-building experience for his students.

“Both of the students that took advantage of this opportunity last year are working in the game development field,” said Geisler. “That’s a great track record and we hope to continue this especially as we launch the Game Studies major in fall 2016. Interested students in game development and design should keep their eyes on the Information Sciences section of the UWGB course catalogue, which will officially roll out Game Studies as an emphasis this year.”

Published on May 6, 2016, on the University of Wisconsin-Green Bay website here.